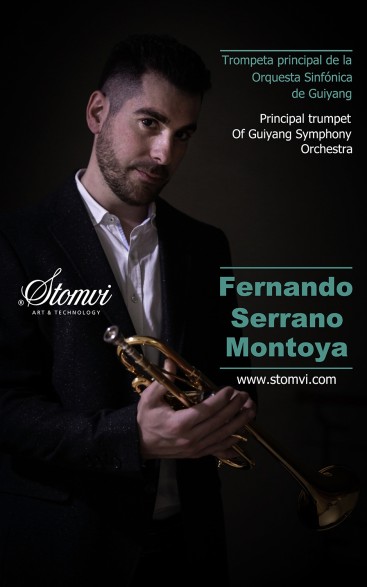 Fernando Serrano Montoya was born in Spain in 1987. After graduating from "Rafael Orozco" Conservatory in Cordoba, he also graduated from the Liszt Ferenc Academy in Budapest (Hungary) specializing in chamber and solo music with Professor János Kirsc, obtaining that year the special prize for best interpretation of the piece composed by Dragony Timea in the Verseny Trumpet Competition held in Budapest.

In 2015 he received a special scholarship from the Liszt Ferenc Academy to take part in the Master in Interpretation (specialty: trumpet) finishing it with higher qualification. The same year he won the third place in the Hungarian National Competition.

He made solo recordings with the Sofia Philarmonic Orchestra and, in 2019, the CD ̈Virtuosity ̈ album was released where Fernando performs world premiere Concerto for trumpet and orchestra of John Robertson's. He obtained the position as co-principal trumpet in the Sichuan Symphony Orchestra.

Since 2021, he is the Principal trumpet in Guiyang Symphony Orchestra.